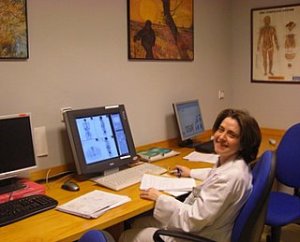 That’s Pilar, aka “mi Pili”, and one third of The Team.

Yesterday I had my third PET scan, which had been recommended by my new oncologist last Friday.  Susan (Pip) couldn’t come with me for this one as she has a friend from the US visiting, and so I was very lucky that my friend Carmen was available. Based on the last two PETs, I told her we would probably be out of there in about three hours. Wrong!  We ended up there for six hours, so I definitely owe her one. Though she said she didn’t mind at all as she had nothing planned that afternoon and had brought books and some stuff from work, plus when we were both waiting together we talked, played Hangman on my iPhone,  went for a snack, and had quite a good time…

And I totally lucked out because “One Poke Manolo” (not to be confused with “Two Poke Manu“) was working the afternoon shift … I swear that guy can find veins that don’t even exist! And so, after I was painlessly injected with the radioactive isotope – and a serious tranquilizer – I lay back in my comfy chair and kind of drifted off until it was my turn for The Machine. Though I did find time for a quick Tweet before I went in.

I took that photo of Pilar on the way out (after having missed an excellent photo op to get all The Team together earlier on).  I’d seen both Ricardo and Isabel when I arrived and we had a nice chat, but I wasn’t thinking about my next blog post at that point and they left shortly afterwards. Pilar was working a double shift, which meant she had got to work at 8.30 in the morning and was still there when Carmen & I finally said goodbye at 8.30 pm.  Which kind of put my “long afternoon” into perspective.

Carmen dropped me off at a square near my house and on the way home Nog called and invited me out for tapas. Other than a small snack around 6pm I hadn’t eaten all day. So we went to Enrique Becerra (hadn’t been there since my birthday) and were surprised to see some very nice changes made to the bar and restaurant area downstairs – more on that in the next azahar’s Sevilla weekly Sunday post.

And so, we had a few tapas and some wine and then asked José for the bill. Which he brought along with a couple of extra drinks on the house. And a couple of minutes later a plate of “on the house” flamenquíns also arrived at our table. Oh that José!

So we were totally stuffed by the time we got back home.  Then I had to have a shower (recommended to help make me less radioactive) and sat up for ages drinking water. I should have the scan results back by Friday and meanwhile Ricardo is going to set up my colonoscopy appointment. And after all that I will hopefully have a clearer idea about where I stand healthwise, and what to do next.