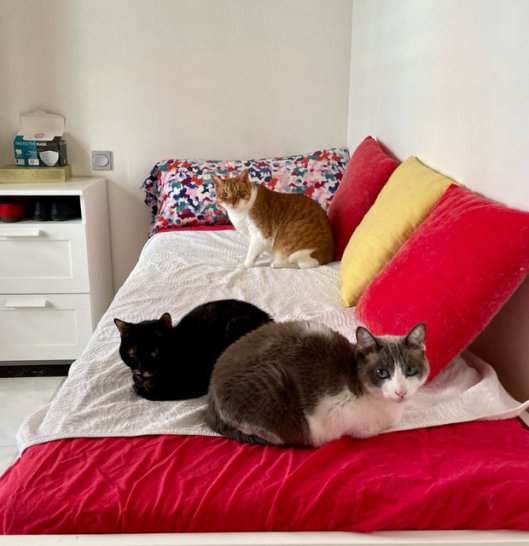 It’s that time of year. I mean, Loki seems to barf up hairballs all year round but once he starts shedding in the spring things get serious. Especially as he has taken to barfing during the night ON THE BED in the guest room. So after a couple of spectacular “incidents” I had to not only wash the sheet and the mattress protector, but also the thick zip-on cover that comes with the mattress. Fine. But you know, getting the foam mattress out and back in again was no picnic, so I decided to opt for a little extra protection.

Hence this old towel that is still quite absorbent, placed over top sheet, protector, cover as it’s much easier to wash. As you can see, the towel doesn’t cover the entire bed, so I moved the cushions up against the pillow and pulled the towel down, so in the end the bed was about 90% extra-protected. And dammit, wouldn’t you know that Loki managed to throw up last night on that 10% sliver of available space. Fucker. Gotta admit he has a talent for it.