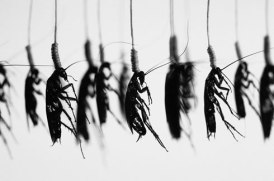 Walked into the bathroom this morning and when I turned the corner there it was!!! At fucking eye level no less, scuttling down the wall and I totally screamed!!! – kind of like the scream you hear in cheap horror films. Raced out of the bathroom and got my hero Noggin to grab a shoe and smash it to smithereens.

Bit of history. I live in a very very old apartment building in the centre of Seville. And of course everyone knows that these horrid creatures are living in our walls, floor/ceiling spaces, etc. But they don’t usually come out. Talking about the massive two-inch-long American cockroaches that also fly! (my worst nightmare).

During the more than 12 years I’ve lived in this apartment I’ve only ever seen one or two of the fuckers annually – usually during the summer. And when Lua was alive she made very short work of them – I only knew they had been there cos I’d find their sorry corpses on the floor the next morning.

But last September they started showing up in the kitchen and bathroom on a regular basis (gaaaa!). Then after a couple of weeks they disappeared again. At the time a lot of people in the neighbourhood had been complaining about this and they put it down to all the recent road works – disrupting the nests? But then I found one in the kitchen a couple of weeks ago (when I went to get a bottle of cold water in the middle of the night – gaaa!) and then again this morning in the bathroom.

I honestly cannot cope with them at all. I mean, I know they’re way smaller than me and not life-threatening or anything. But it’s the gaaaaa-factor, you know?

So it looks like I’m going to have to find some sort of ‘not terribly toxic’ way to control them. Because of the cats I can’t spray or put down other toxic stuff. I’m told boric acid powder is very effective but I’m not sure if it would harm the cats. Also, I once read that putting down silica sand is something that gets attached to their bodies and later when they groom (roaches groom???) their insides get ripped to shreds.

I just don’t understand why after so many years without any problem with these most horrible things that they are suddenly showing up in my home . . . help?