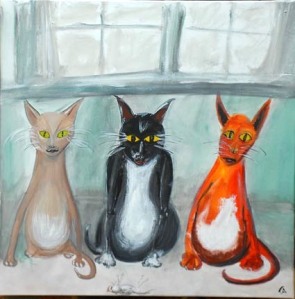 Today I had to make the Big Decision about taking in this little darling. Fani took the kitteh to see Yolanda this afternoon and there were a couple of surprises. First, she is a girl. Second, she is approximately four months old, which really surprised me because she is so tiny. But apparently all the milk teeth have been replaced by permanent ones and, despite her size, she isn’t as young as we all thought.

The good news is that she seems relatively healthy. She was deloused inside and out when Fani took her to a different vet a few weeks ago, and I’m told she has a good appetite. The only possible bad news is that the test they did for feline leukemia was inconclusive. Yolanda said there was a small “blip” in the test results that meant she couldn’t say for sure that it was 100% negative, and she recommends redoing the test in a month’s time. Meanwhile, the kitten shouldn’t have contact with the other two cats as it’s very contagious and can be transmitted by saliva. Also, although both Azar and Loki have been vaccinated now, this doesn’t offer total protection against the virus.

So, this was all going through my head after Yolanda called me this afternoon. I had already half-decided that keeping the kitten “in quarantine” for a month wouldn’t be too much of a hassle, when I thought it would be a case of waiting for it to be old enough to have the test accurately done. But now it will be a case of retesting because there is a suspicion of disease. Also, I was kind of wanting a male cat that would grow into a robust playmate for Loki. This tiny thing looks like she’ll never weight more than a couple of kilos at most. So I called Fani to tell her about my doubts and she was understandably upset, as the only other option for the kitten at this point is to take her to Greece on Monday, which will be a long 7-day journey by car.

And so… I’ll be picking her up tomorrow morning. What the heck. Worst case scenario is that she has feline leukemia and I have to find another home for her where she would be the only cat. But after getting this involved I couldn’t just walk away.

I’m thinking of calling her Luna.