Yesterday was my Sevilla Silver Anniversary! 25 years ago I moved into that studio apartment up there in calle Mateos Gago, which was where I spent my first year in Sevilla. It was a memorable day for many reasons, arriving in town at precisely 8 pm on September 16th after a long drive from Salamanca with all my worldly possessions and two screaming cats (Lua and Sunny). And THEN having to wait in the car for three hours because the landlord was late. Luckily we found parking right out front, and the friendly gang at Bar Campanario brought drinks and snacks out to the car for us.

Somehow this year the date had slipped my mind, so there was no time to organize a special party like I did for my 20th anniversary. Though that party didn’t take place on the 16th either, so I guess there’s still time. We’ll see.

To celebrate I almost did another getaway with Peter, this time to Mérida and Cáceres (which would have also fit as they were on my route Salamanca-Sevilla), but that was also a bit too last minute to organize. So instead I met Peter at midday yesterday and we went on a little tapeo, visiting some of the places I’ve known and loved all this time – Las Teresas, Bodeguita Romero, Casa Román – and finishing at La Azotea (where Bar Campanario used to be). It was a lovely day. 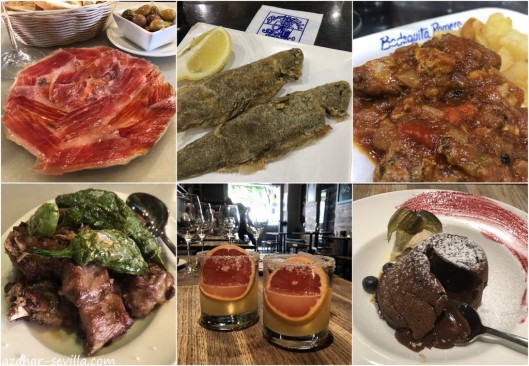 Back then it would never have occurred to me that I would end up working with all these fabulous bars on my Sevilla Tapas Tours. Something that has become somewhat tainted by recent copy-cat tours (while we were at Las Teresas one was there with a big group, overtaking the bar, being loud and obvious, and ruining the natural bar ambiance) but you know what? I was there long before these wanna-bes and I also know they are merely “tolerated” by my bars, not loved by them like I am. It’s a shame these other companies can’t use their imagination and create their own tours like I did. After all, there are more than 3,000 tapas bars in Sevilla.

But yeah, I’ve come a long way. From a young-ish 36-year-old arriving in this glorious city on a wing and a prayer in 1993. And after close to 15 years teaching English, and then almost 2 years being laid low by cancer and treatment, I ended up finding the work I was always meant to do. I get to meet people from all over the world, share my experiences to optimize their enjoyment of Sevilla and its fabulous food and wine, and – I won’t lie 😉 – I also get to TALK A LOT. Love it.