This morning I found out that Spain is considering removing the mask mandate on public transportation as early as the beginning of February. The previous government update on this (last December) said that the mask mandate would remain in place until March 2023 at which time it would be reviewed again. And suddenly all these media outlets are shrieking “it’s almost over!” and saying we could all be mask-free much sooner than that. Well, it’s not THAT much sooner (one month) so what is even the fucking point of this? Why the rush? Also, and this is huge for me, I’ve just booked flights to Bilbao the first week of February. Fuck.

Yes, it’s another work-related research trip. And it will be the first time I’ve boarded a plane since… 2019? My first impulse was to just cancel everything, but then I calmed down and tried to work out how I was going to move forward, and keep living, in this new mask-free Spain. Truth is, I really don’t know yet. I mean, I still go out and live my life (as carefully as possible), and I am still doing my tours (though I put a hold on them during Christmas and January to see how the latest variant evolved). I still wear a mask when I am indoors, other than when I’m eating in a tapas bar of course, but then I sit next to an open door or window and I’m not there long. But in shops and especially on public transportation it just makes sense to mask up.

I wonder how all the minimisers and anti-vaxxers are going to feel once they become the “vulnerable” that they disdain so much, which seems inevitable at this point. May not happen overnight but karma is totally waiting for these selfish assholes. Just seriously sad that by the time this happens they will have taken down so many people who actually cared. 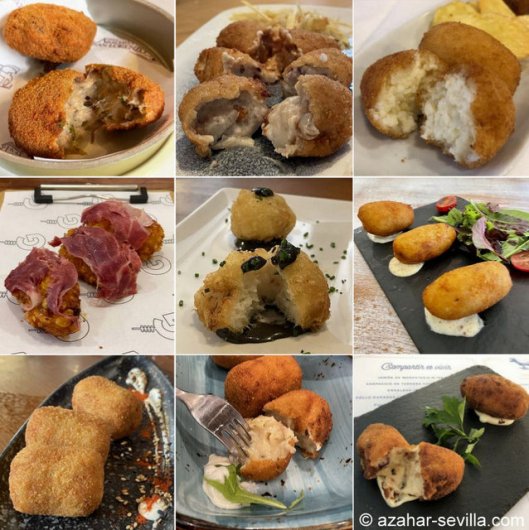 It’s also Blue Monday but I don’t believe in that.
This is way more fun (and tasty!).
What’s your favourite croqueta?

This is now streaming on HBO Max and Discovery+. Of course José Andrés has become a legend these past few years not only for being a world class chef but also with his humanitarian work and heading World Central Kitchen. During lockdown he was putting up short videos on social media of him at home cooking with his daughters and they were so charming that when I read about this series about taking his daughters around Spain I was really looking forward to it. And well… I just wish I liked it more. There are six episodes and I’ve watched three (Barcelona, Andalucía and Madrid) and I don’t know. They feel a bit superficial as if they are aimed for an American audience to promote travelling to Spain. I mean, it’s fine. It’s still fun to watch but I didn’t expect to see them ordering sangría (!!!) and extolling the virtues of the Boquería Market (which has become a full-blown tourist attraction). Anyhow, it still has some nice scenery and it’s entertaining. Let’s see how it goes with Valencia, Asturias and Lanzarote.

UPDATE: The final three episodes felt quite different from the first three. Perhaps because I’m less familiar with those locations? Also, some amazing scenery, especially in Asturias and Lanzarote. Overall an enjoyable series.

Not surprising to learn that 6 out of 10 dwellings in the Barrio Sant Cruz (my old ‘hood) are now tourist apartments. But it was a bit shocking to find out that it is the most tourist saturated neighbourhood IN SPAIN. And these stats are from 2019 so things are actually much worse now. I’ve  been living in Museo for the past five years and even here new tourist apartment buildings – ENTIRE BUILDINGS – are popping up all over the place. Likewise new hotels. Everywhere.

You don’t need much of a brain to figure out that without neighbours there is no neighbourhood. That without neighbours the entire local infrastructure becomes geared to serving tourists, which is quite hideous. No more corner stores, fruit and veg shops, book shops, no more newsagents… small family run bars replaced by sleek and shiny corporate replicants. And instead crass commercialism abounds with tacky souvenir shops vying for space alongside mediocre tapas bars, the streets flooded with dazed tourists thinking they are experiencing the REAL DEAL. The irony of course being that the very thing they have come to see no longer exists and they don’t even know it. I still love Sevilla so much, but I also miss her.

The day after our epic meal at Cañabota I took the Renoir boyz out for a Tasting Triana Tour. A market visit with jamón and manzanilla followed by a visit to three bars and plenty of walking around. Aside from Frank it was their first time in Triana so it was a FULL DAY in all kinds of ways. Food, drink, experiences… and tiles! Good times.