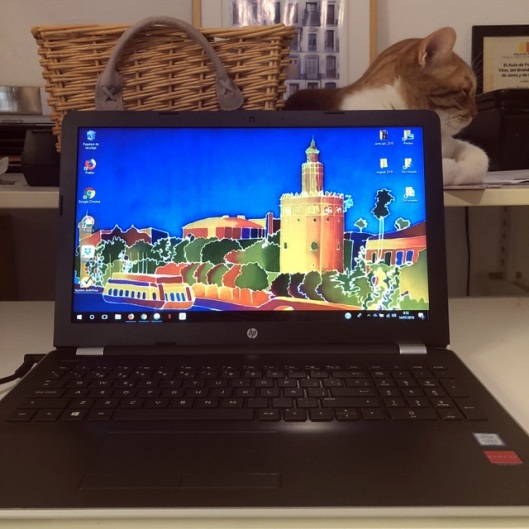 Not the way I thought Friday was going to turn out. And nope, this isn’t mine. Got a message from Peter in the morning saying that his laptop (the venerable Greyhound that he inherited from me a few years ago) seemed to have died. So he brought the beast over and we tried to resuscitate, but to no avail. And so there was nothing left to do but go shopping!

Luckily the summer sales are on now and so, after a bit of comparison shopping at FNAC and Corte Inglés, Peter settled on this guy and we spent the afternoon/evening at my place getting it set up. As nothing was retrievable from the Greyhound it meant starting from scratch, and losing some photos, but Peter doesn’t have as much crap on his computer as I do, so it was relatively easy. And fun! I love doing this stuff (and Peter doesn’t) and even after he left I stayed up doing a bit more fine-tuning. Now it’s all ready for Peter to take home.

Checking back, I got the Greyhound in July 2012, and my present laptop Sterling in September 2015. So I hope there are still a few good years left for Sterling. How long do your laptops usually last? Also, what can I do with the old dead ones?

Meet Sterling. Named so not just because he’s a lovely matte silver, but also for his many sterling qualities. The i7 processor, 12 gm RAM, 1 T memory. I’ve been working (and playing) with him all weekend and have to say I’m very happy with my purchase. And flatmate Peter is happy too because he has inherited the Greyhound. Question: what to do with two very old laptops no longer in use? 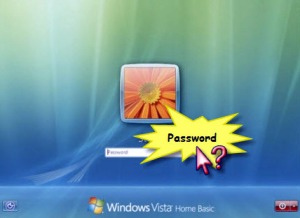 Two nights ago I was shutting down my laptop Shadow (a Toshiba Satellite L-300) and suddenly the screen went wonky and then a page like this showed up asking me for a password. Except I don’t use a password for Shadow. And then I remembered that the same thing happened to my friend Flor a couple of years ago with her almost new Toshiba. Apparently there is a company-set password that exists in each Toshiba computer and sometimes something sets it off – have never been sure what. Anyhow, Flor had to have her laptop memory replaced and lost all her data, photos, etc. because she hadn’t made a back up. Disaster.

I have no idea what happened the other night but it could be the very stupid shut-down process on Windows Vista. As you can see, there are various options given, the first three being “change user”, “close session” and “block”. Block?? Who the hell would want to block their own computer? In any case, ever since hearing about Flor’s problem I have been very careful when signing out, but I must have hit block instead of close session and then got the scary screen above asking me for my password.

I tried one of my usual passwords (even though I knew I hadn’t set one – panic!) and then remembered that when Flor tried doing this, after about three tries her computer shut down totally. Aack. So then I tried rebooting by holding down the off button and turning it back on again and … phew! It worked! But later when I tried shutting down by closing my session I got the scary password screen again. So I did the same re-start thing and haven’t dared turn my laptop off since. It has a sleep button, so I’ve been using that.

Luckily I had just reorganised all my photos and had done a back-up of all my important files on my external HD. But now what do I do?