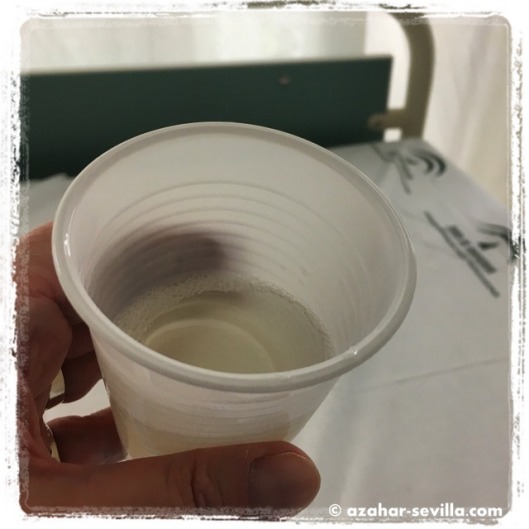 THIS is what I ended up drinking instead of Tío Pepe en Rama today! But I’m getting ahead of myself. What happened was that after a lazy Sunday I settled down with Morcilla to watch some Netflix and have a late lunch (roasted cauliflower and parmesan noodles) and about an hour later I started feeling sharp pains in my upper abdomen. It got so bad that I had to go lie down, and after awhile the vomiting started. This lasted all night and by morning I was in so much pain I could barely stand up. Yep, it was time to go to Emergency.

When I got there I had my belly prodded and was immediately x-rayed, had blood taken, and was given an intravenous blast of painkiller (phew!). And about an hour or so later I was told the dreaded news that I would be staying in for Observation. They suspected an obstruction and, given my history, didn’t want to take any chances. I had been hoping it was my hernia acting up, but the doctor said the hernia wasn’t “presenting as a problem”. She said it was more likely the adhesions, but that they wanted to rule out, you know, CANCER. So I was wheeled over to Observation, where I put on my gown and got into bed. Luckily by this time the vomiting had stopped otherwise I would have had to have the super-dreaded NASOGASTRIC tube stuck down me in order to ingest the liquid you see above (a contrast agent for the second x-ray, for comparison with the first). Imagine licorice-flavoured snot…

Long story short, the second x-ray didn’t show anything alarming and by this time I had had a BM (more proof there wasn’t a serious obstruction anywhere) and was told that if I was fine (no vomiting) after having a snack, then I could go home. I also got to see the surgeon who had performed all my ops. But I was already counting the minutes – being in the Observation is not an experience I would wish on anybody – so when they suggested I also stay for dinner just to be sure I PROMISED I would come back immediately if there was the slightest return of the previous symptoms. And so they let me go.

What a Monday. I was supposed to have gone to the presentation of this year’s Tío Pepe en Rama, which has become something of a tradition. But to be honest, I was just so relieved that nothing was seriously wrong, and so happy to be back home with the cats, that missing the event didn’t seem so important. I’m supposed to stick to a bland diet for awhile as they are still not sure what caused the temporary obstruction. But as you can see below, adhesions are quite nasty things to have, and can cause all kinds of painful (and sometimes deadly) mayhem. Since I have had four major abdominal surgeries you can imagine the mess that’s going on in there. There is a chance of having some of the adhesions removed, but as this would involve another surgery, it will probably end up with more adhesions later on anyhow. Will have to seek some medical advice about this. 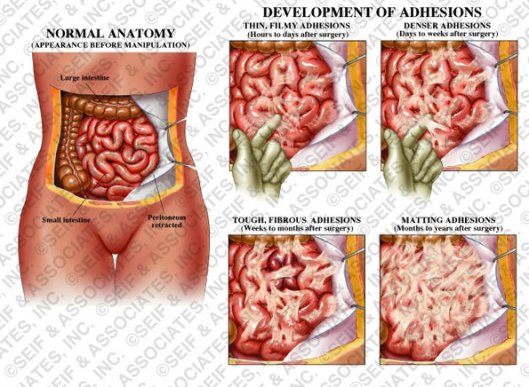 Definition: Adhesions are fibrous bands of scar tissue that form between internal organs and tissues, joining them together abnormally.

Description: Adhesions are made up of blood vessels and fibroblasts—connective tissue cells. They form as a normal part of the body’s healing process and help to limit the spread of infection. However when adhesions cause the wrong tissues to grow into each other, many different complex inflammatory disorders can arise. Worldwide millions of people suffer pain and dysfunction due to adhesion disease.

Depending on their location, the most common types of adhesions may called:

Adhesions can form between various tissues in the body including:

Although adhesions can be congenital (present at birth) or result from inflammation, injury, or infection, the vast majority of adhesions form following surgery. Adhesions are a major complication of many common surgical procedures and may occur in 55% to more than 90% of patients, depending on the type of surgery.