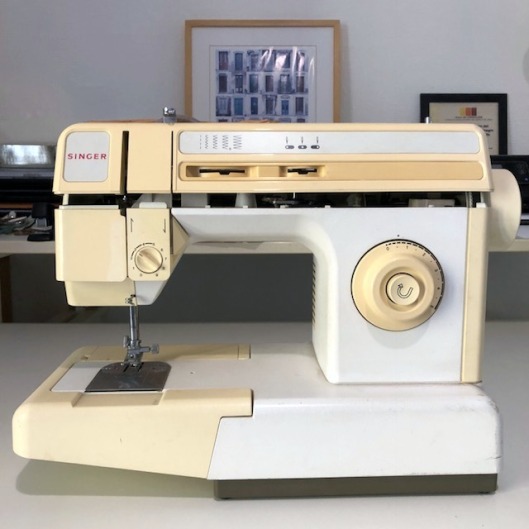 My mother was a seamstress and I’ve been sewing since I was a teenager. This led to me leave Winnipeg in order to study fashion design in Toronto many moons ago. Which then led to me ditching my fashion career after five years working in the biz. And to cut a long story short… that’s how I ended up here!

Some of you long-time readers may recall my ill-fated attempt to start up an online clothing store back in 2006, featuring all linen natural clothing (I still have whacks of stock in my storage room if anyone is interested…). And perhaps because of that my interest in making my own clothes waned.

Anyhow… one of the many downsides of being FAT is that there aren’t many nice clothes around for big girls. Yes, I know… so lose weight! Trust me, been working on that, and it hasn’t been easy. Anyhow! With summer coming up I decided I wanted to have a few nice things to wear and dragged out my old trusty Singer (which you can see above with its top partly off). I bought this when I first moved to Sevilla in 1993 and it has served me well. But to be honest, I haven’t used it in years, except for the occasional “repair job”.

The other day I took it out in order to “re-purpose” an old dress and turn it into a summer skirt. Everything was going well until this morning when I needed to put more thread on the bobbin. And the fucking bobbin spindle refused to turn! As you can see, I took the thing apart, but couldn’t find the source of the problem. So then I got online to see how much a new machine would cost. But then I went back to the old beast… and it looks like if I replace the rubber O ring under the spindle it should work again. I’ve also been taking sewing machines apart since I was a teenager.

So… what to do? I’ve been putting off taking out the old overlock machine I bought a million years ago back in Toronto. Yes, it did make it overseas (a friend brought it on a flight to the UK as hand luggage). Back then those machines cost a fortune (my old Juki cost 1,000 dollars), and also weighed a ton. Now online I see them for about 250 euros.

Would having new machines inspire me to design and sew again? I think they might, especially as the new ones are much lighter. I can barely lift the ones I have now. Also, my Juki has always been temperamental with thread tension, so we’ve always had a kind of love-hate thing going on there. But to be honest, I’ve always had a love-hate thing going on with sewing itself. I mean, I love the results, and I’m actually very good at it, but man, sometimes I look at things I have made and think “I remember EVERY seam!”. And not in a good way. 😉 I also see EVERY flaw, every time I went a bit wibbly. So not sure what to do. Meanwhile, something SHOULD be done with the hundreds of metres of Italian linen that are also in my storage room. Any takers?

For over a year now my fabulous upstairs room has barely been used. This is about to change.

It’s funny how chance encounters can make such a difference. The other day I stopped by my friend Maria’s shop and found her chatting with a rather exotic looking woman called Fourat. A few minutes later all three of us were sitting at La Azotea up the street ordering wine and tapas, and an hour or so later I was over at Fourat’s house (turned out she lives on the same street) setting up a Twitter account for her and talking about our various projects.

One of the many things that came up was my now sadly abandoned clothing biz and I mentioned how I hadn’t sewn anything in ages although I still had TONS of fabric. And so this morning Peter and I cleared off one of the tables upstairs and set up my sewing machines so that they are there and ready to go whenever I feel inspired, as one thing that always puts me off sewing is having to set everything up and tear it all down again afterwards. The other thing is that I don’t actually like sewing, but that’s partly to do with the first thing.

Anyhow… it’s such a perfect room for sewing because of the lovely natural light and it’ll be great to actually be using that room. Until now it’s mostly just been Peter’s classroom for the couple of students that come to the house, even though there’s a comfy chair for reading and a music system set up. I’m sure that once I’m spending more time up there it will also inspire me to start doing more with the terraza. And all because of one chance meeting. Fourat (who gives classes in Lebanese and Mediterranean cooking) and I are also planning a project or two together, so stay tuned for that…

Yes, I still hate sewing, but I also still think it’s an amazing process and I find this image totally fascinating as I’ve never really understood how a sewing maching, well, sews. I hope nobody comes up with a version of this for serging machines or I’ll end up cross-eyed and perhaps quite mad. Cool, eh?

Why is this concept so strange?

Anyhow, it shouldn’t come as a surprise since I have said it before, as well as often. I mean, is a chef expected to enjoy gardening, an architect bricklaying, a winemaker whining … hmmm. Well, you get the idea.

In fact I’ve been sewing for about 40 years now and have never really enjoyed it. Though I do enjoy the results, because I’m actually very good at it. But there are people who sew much faster and better than I do and, frankly, I prefer to leave it to them when I can. The thing I do love are the materials and colours and turning them into something lovely. But I am far too much of an impatient perfectionist to take any joy in stitching up each seam, gathering, top-stitching, hemming and what-have-you. Every time I make a garment I sweat blood over every stitch, my shoulders end up in knots and I feel totally exhausted.

But it is that time of year once again when I look through my summer wardrobe and go … shit. So this past weekend I cut out a few things. I’m being practical rather than worrying about “street image” and starting off with a couple of comfy linen dresses and two light cotton nightdresses. You know, in case the next PET scan doesn’t come out as hoped and I end up housebound again this summer. And as I suspected, it’s been hell. But hey, I’m going to end up with some new clothes that didn’t end up costing me anything but time.

As you can see, Loki has been lending a helpful (not!) paw…