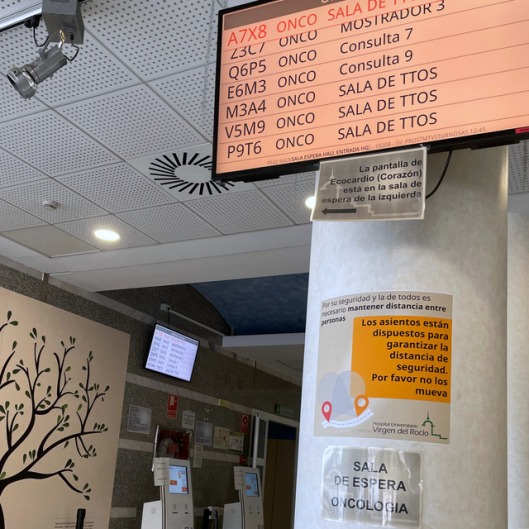 I finally had my oncology revision re: the (extremely unpleasant) CT scan I had in June. Things have changed since I last had a physical appointment at the hospital – the last 2-3 have been by phone. So when I got there today I saw that the oncology waiting room is now in the hospital lobby. With their new system you enter your ID number into one of those machines back there and out pops your appointment number. Then you grab a seat and wait for your number to appear on the screen. It’s a bit of a hike to oncology from the front of the hospital, but oh well. Then I found out the consulting rooms are no longer in the old oncology department but along the hallway leading to it. Whatevs. I came prepared with a print out of my last CT scan translated into English and with my questions ready.

What can I say? I am sure there must be some kind and empathetic oncologists out there but in my (now vasty) experience, I can say I have only met one, and she was a friend of a friend so perhaps that’s why she was nice to me. Anyhow, this guy today was both abrupt and dismissive but I held my ground and said “I have a few questions!” after he told me everything was fine and there was nothing to worry about. Honestly, if looks could kill.

He did tell me one thing that took me aback (though I should have known or at least guessed). Apparently since 2008, between PETs and CTs, I have had about 24 scans (!!) and he said at that rate I could have serious problems in 20 years after so much radiation. Well, there’s no way I’m going to see 85 anyhow, but I took his point and asked… “so now what?” and we agreed to another colonoscopy in February (last one was Feb 2020). And THEN if there is anything dodgy he may rethink the CT scan. So now I’m waiting for the colonoscopy appointment and more blood tests.

As for The PAIN I’ve been having since mid-August… Mr Empathy gave my belly a few pokes and prods, told me to lose weight and said I should get back in touch if it gets worse.