The April Feria in Sevilla is not my favourite thing – in fact it’s not even my favourite feria – but I do like stopping by for at least one afternoon to see the splendid horses and the lovely flamenco dresses. By chance this year it has also coincided with the azahar, which is still (just barely) on the trees. It also suddenly became summer yesterday, with beautiful blue skies and temps of around 32º or more.

So here are a few pics from yesterday, with possibly some “feria by night” ones to come. It’s been years since I’ve been to Feria in the evening, but I have an invitation to go tomorrow, so we shall see.
END_OF_DOCUMENT_TOKEN_TO_BE_REPLACED 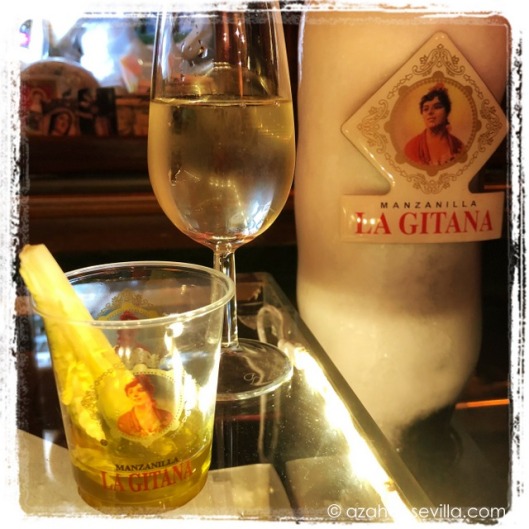 The noche de pescaíto (night of the fried fish) is a time-honoured tradition, taking place on Monday evening before the lighting up (the alumbrao) of the April fair grounds  at midnight. Until now. When the powers that be decided last year that Feria should be extended to include two weekends – the more money to make, my dears – this meant that the alumbrao would now take place on Saturday night. Along with the pescaíto. Except at one special location in Sevilla that will not give up the traditional Monday evening custom.

The Antigua Abacería de San Lorenzo is host to all manner of weird and wonderful special events that celebrate various Sevillano traditions. And nobody does seasonal window dressing quite like husband & wife owners Ramón and María Carmen. It’s always a bit chaotic there and always a lot of fun. 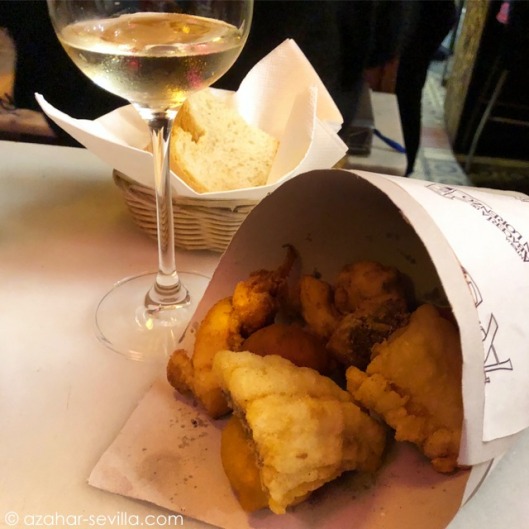 I actually learned a couple of things tonight. First that THE sherry drink of the Sevilla feria (manzanilla) is a relatively recent thing – 30 years ago it used to be fino. ALSO… this whole noche de pescaíto thing is also only about 30 years old, and nobody seems to know how it started. Other than the evening before the alumbrao there were obviously people still setting up their casetas and having a casual meal before it all got lit up. Why it ended up being a fried fish meal remains a mystery (since you can actually have fried fish all week long at Feria). But whatever. The pescaíto and manzanilla at the Abacería tonight were great!

So excited that my long-time Flamenco & Tapas Tour partners – the fabulous Museo del Baile Flamenco – have updated and upgraded their Momentos Flamencos show to include an extra dancer and singer. It adds not only more dancing, but more colour and passion. I mean, it was always wonderful, but now…? You really need to see this.

I was a bit “last minute” getting things organized to attend this year’s Copa Jerez. Actually, what happened was that both my friend Tomoko @fu_yan and I had made the same mistake while registering online, so it turned out that we weren’t registered at all! Thankfully the good people at the Consejo Regulador said we could get passes for the second day of the two-day event (the first day was fully booked), and would be able to attend the forums and showroom. I got to Jerez on the first day (to save having to take a 7am train on Tuesday) and I’m so glad I did.

What happened was this! Another Jerez friend Pilar @enosherry was working as a guide/translator with the Copa Jerez international competitors and was told she’d be leaving them at the Claustros de Santo Domingo for a sold-out concert & cata, and then would pick them up afterwards to take them to the dinner venue at the end of the first day’s activities. We arranged to meet up at La Moderna across from the Claustros while the concert was on, and Tomoko and I decided to go a bit earlier to have a snack. Then while we were waiting for Pilar she sent us a message saying that there were a few empty seats at the concert and we should come over. 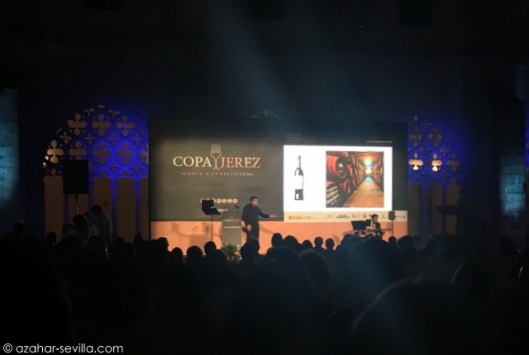 The “concert & cata” format has been kicking around the sherry triangle for awhile, with different sherries paired with different flamenco styles, but this night it was extra special. Josep Roca was our host along with Diego del Morao on guitar. But not just any guitar – this one was the last guitar Paco de Lucía had commissioned, but sadly never got to play as he tragically died before it was completed. I have to say it was a very moving and beautiful (and delicious!) experience. Also perfectly coordinated with a small army of waiters bringing the next sherry to us just as the next musical piece began. Well done, Consejo! 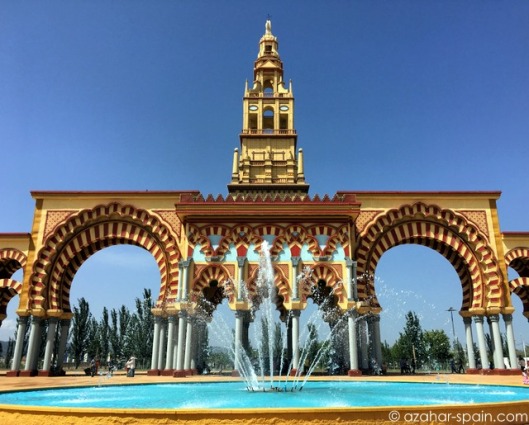 I hadn’t planned on going to the feria in Córdoba this year. But when I saw Roma @artsylife posting pics from Málaga on her Instagram, and when she said she wouldn’t make it to Sevilla this visit, we decided to meet up for a day in Córdoba. So Peter and I caught an early train and, after meeting up with Roma for a nice lunch at La Regadera (warning: never try to eat at any ferias) we got a taxi to the fairground. And well, it was HOT. But we managed to find a couple of nice air-conditioned casetas to enjoy a cold beer and watch people dancing. Like in Jerez (and unlike Sevilla) the casetas in Córdoba are all open to the public. But unlike any other feria I’ve been too, many also have A/C. Bliss. Click through to see more pics…
END_OF_DOCUMENT_TOKEN_TO_BE_REPLACED