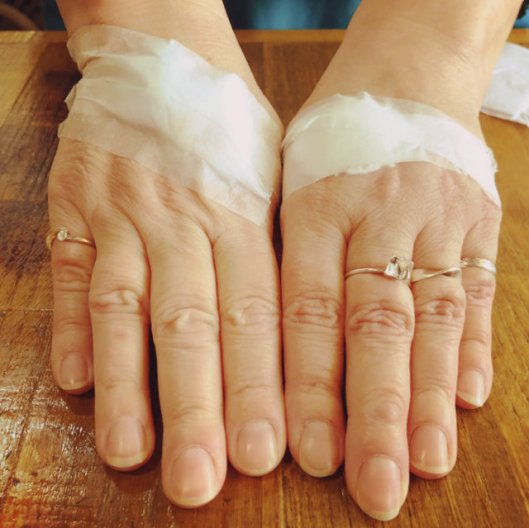 The endoscope examination is pretty much like the one at the other end, except without the horrendous massive “clean out” prep. For this one all I had to do was not eat or drink for 8 hours before the test. I actually had my last meal more than 12 hours before, but going 8 hours without any water (!!!) was really hard. I’m a 2-litre a day water drinking fiend.

Just like with the colonoscopy I was sedated before the procedure but this time I wasn’t so lucky with my nurse, who could NOT seem to find a vein anywhere. And hand pokes are way more hurty than arm pokes, but anyhow. I was eventually chemically relaxed enough and they did their stuff. It was uncomfortable more than painful, and I got a bit gaggy towards the end, but nothing too awful. And then I was wheeled into the recovery area.

And the best thing of all was that they told me they hadn’t found anything, that I was “all clear”! I have to say that I love this about the Digestivo department, giving patients their results straight away so they don’t have to wonder and worry until they see their doctors again (my next onc appt is March 19th). Though I suspect they only hand out the good news results. But hey, I am happy.

From what I understand, this now means that they have ruled out two of the main possibilities for recurrence – for now. Next up will be another CAT scan three months from now to compare those results to the last one. The main issue being ALL THAT INFLAMMATION that nobody can explain. And so… good, right? At least until I hear otherwise. And so, back to living in denial.  😉

6 thoughts on “my first endoscope”