Tiro la Línea is a residential neighbourhood some way out on the south side of town, and I wouldn’t normally have a reason to be here, but my friend Anna @annalibera was in town, and as this is her old neighbourhood, I thought it would be a good time to visit the little local market there. A tapeo was mooted, and so, accompanied by friend (and auxilary stomach) Peter @SVQConcierge I set off to meet her there.

Bar Cafe Mercado is a typical small, cheap and cheerful bar in the corner of the Market, so the natural place for us to head to for a start of tapeo beer, which came with a complimentary nibble of tortilla. We followed up with a tapa of mollejas (sweetbreads) breaded and deepfried. These were absolutely delicious, and the kind of thing that these little market bars are all about (that, and standing at the bar in a crowd of other snackers). We didn’t have time to tarry long, though, as we had a list of other places to go to, so it was off to the other corner of the market, and its second bar.

Bar Mijita is a rather larger establishment with tables and chairs and more space, but with fewer people about (at least at this time of day – I’m told it’s very popular for breakfast). We shared a couple of montaditos, which were nothing special, though doubtless hot and filling if you’re starting work early, and we were soon off to our next stop.

La Peña Betica Nuestra Señora de las Mercedes was definitely our favourite of the places we went to. Talk about a local neighbourhood bar! Not the kind of place you’d discover for yourself, tucked away in a corner of a residential apartment development, with a small no frills interior, and the tiniest terrace outside, but with that friendly, genuine atmosphere that’s perfect for tapas. And excellent tapas too – perfectly fried crispy chocos, slightly spicy carrillada meatballs, and thinly sliced garlicky grilled pig’s liver. Excellent chips too. I’m not often this far out of the city centre, but next time I’m in the neighbourhood I’m definitely coming back here. 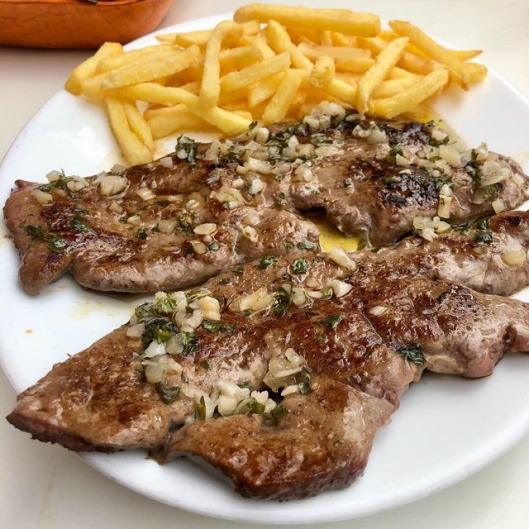 Last stop was Bar Benito, another typical small neighbourhood bar with a terrace outside, that also came recommended by Anna. We were actually pretty full by the time we got there, but still found space for a crispy pavia de bacalao, a solomillo al whisky with lots of garlic, and a cheese empanadilla. 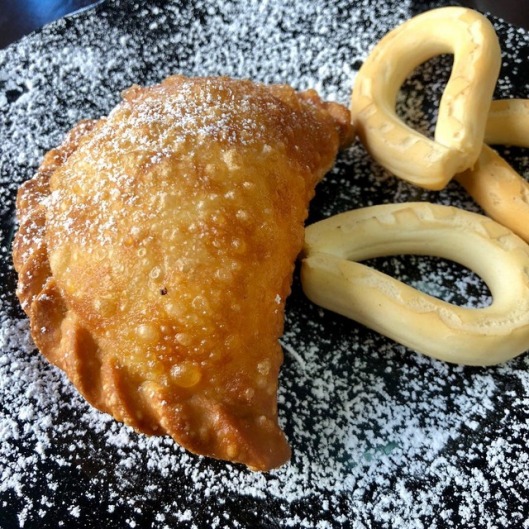 It was a great afternoon and felt almost like going “out of town” on a day trip, though from Plaza Nueva it only took half an hour (tram and a short walk) to reach the market.