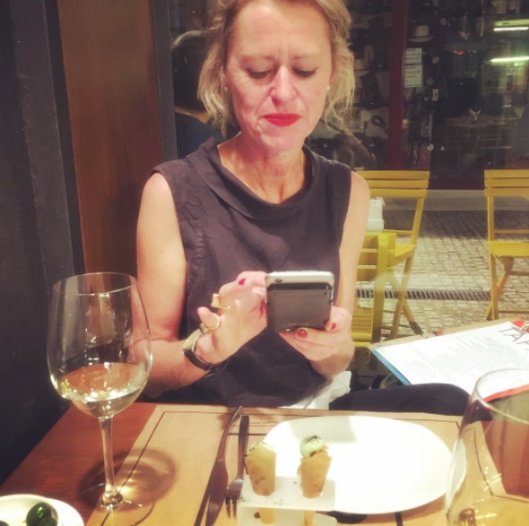 The last time I saw Kate was when we bumped into each other last year at Vinoble in Jerez, and prior to that was the time she came for a visit in October 2013, which was the first time we’d seen each other in over 20 years, since our days working together in Bristol. So when I heard Kate would be passing through Sevilla one a 3-day press visit to Sanlúcar de Barrameda we checked her (jam-packed) itinerary for a possible moment when we could meet up. Which almost didn’t happen as they got to Sevilla an hour or so later than planned and still had to visit the feria and, after my night out with Barbara, I was pretty sure I wouldn’t be up for meeting up late in the evening.

So after a bit of frantic texting it looked like it wasn’t going to work out as Kate didn’t think she’d be back at her hotel until after 10 pm, and so I got into PJs and settled in for an evening of netflixing with the cats. Then another message came through – “I’m in a taxi heading for the centre!” – and so we arranged for the driver to drop her in my ‘hood, I threw on some clothes, raced over to the Plaza Alfalfa, and suddenly there were big hugs all round. We popped into a couple bars, more for some wine and chat since neither of us was very hungry. Good thing too because the food wasn’t really up to scratch where we ended up. But it didn’t matter because the wine was good and the company even better. Once again we discussed the idea for a Málaga Getaway including other friends from Bristol and London, possibly in September. I think that would be fabulous.