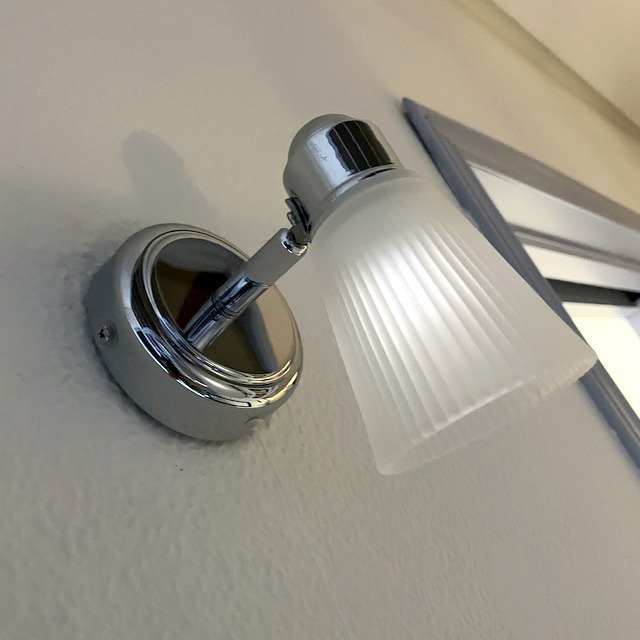 When I moved into my lovely Casa Azahar there were no light fixtures other that a really ugly fluorescent one in the kitchen (which sadly is still there) and the pot lights in the bathroom (which have since been replaced). In the end it took me a couple of months to replace dangling light bulbs with fixtures I both liked and could afford, and then my landlord sent his handyman Tony Black Hands over to install them. Then this week one of the bulbs in my matching two hallway wall lamps blew. So okay, I went to my local electrical shop La Casa de las Bombillas and got two new bulbs because I wanted to change the halogen ones the lamps came with (that get hot as fuck) to LED ones.

So fine. Mission accomplished. But when I went to bed that night and turned off the lights using the wall switch, well, this was as “off” as the new LED light bulbs got (see photo). Perhaps not quite as bright as it may seem in this photo, more like the glow of a night light. And well, I kind of didn’t mind this because I actually had to buy night lights when I moved in here because my bedroom is interior so it’s way too dark for me. But I wondered if this constant glow thing was safe.

Next day I went back to Casa de las Bombillas and they said they will order a different brand of LED bulbs for me to try, saying they sometimes work differently. But they also assured me that the glow wasn’t dangerous and used next to no current. So now I don’t know what to do. I’m supposed to pick up the new light bulbs mañana but maybe I like having extra night lights? Undecided. Especially as if I pull the cord under the lamp (and not just use the wall switch) that turns everything off. So, options!

I know what you’re thinking. How do I get through the day with such hefty issues to constantly deal with. Well stay tuned guys. At this point, after the whole Thermometer Thang, and now this, I’m not sure Casa de las Bombillas will ever look pleased to see me darken their doorstep in future. But wait till I tell them tomorrow about my LED bedroom ceiling light flashing randomly at all hours (forgot to mention this to them last visit). My pal Pablo has suggested a medium, but I’m hoping C de las B will have a more pragmatic suggestion.