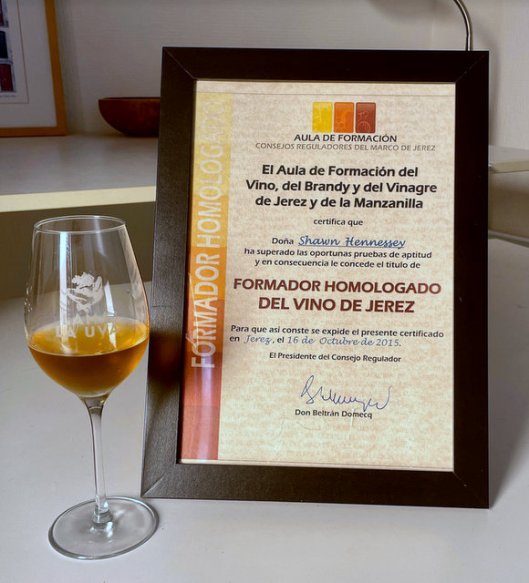 Six years ago today I became a Certified Sherry Educator!

It’s an honour to be included in such illustrious company and a privilege to introduce people to this most amazing wine, or help them expand on their knowledge of it. You never stop learning about sherry, it’s a delicious world to discover, and to keep on discovering.

Also many thanks to all the wonderful bodegas that have always been so generous and welcoming and the fabulous bars in #Sevilla that help make my sherry experiences extra special. Salud! 💛 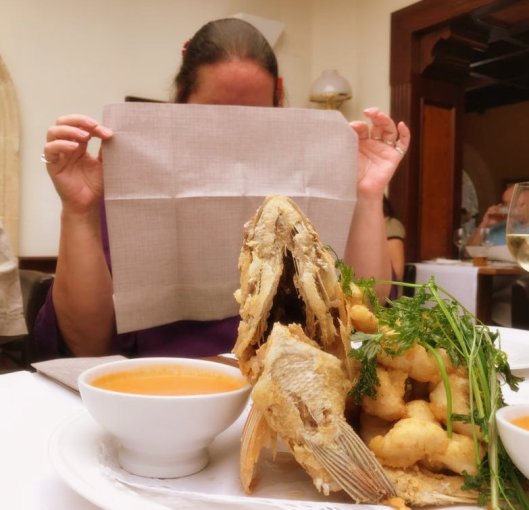 I’m the one with the napkin over my face.

The fourth edition of the CuatroGatos Wine Festival was quite different from last year’s event. This time it was held inside a lovely hacienda on the outskirts of El Puerto de Santa María and there was also the promise of a special dish prepared by Michelin star chef Ángel León. I met my friend Tomoko @Fu_yan at the train station and, having just missed the Wine Bus, got a taxi over. 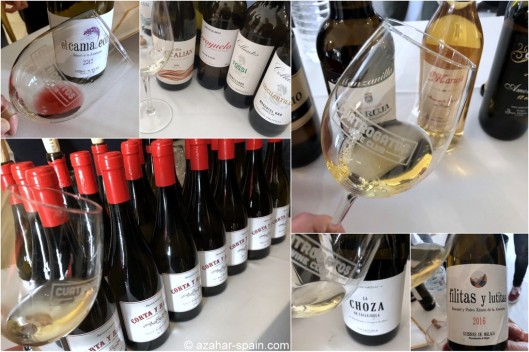 It was a great afternoon revisiting old friends and making new ones. And thanks to Tomoko I tried several wines I may not have otherwise (brand new love is La Choza by Bodega Callejuela). I was also happy to discover that several of the wines I liked are available in Sevilla, and almost all of them at Ana Linares’s fabulous wine shop Lama La Uva (will be visiting her soon!) 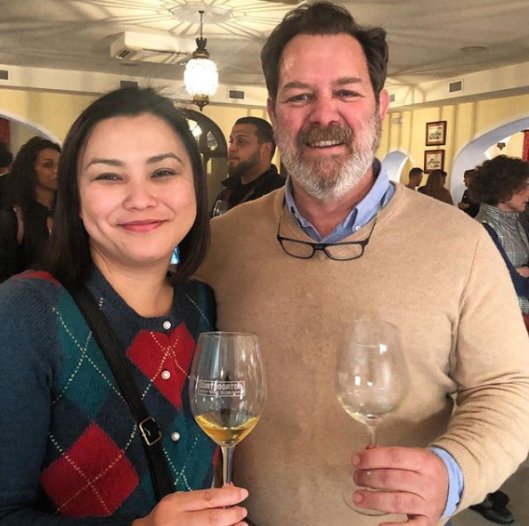 Although there were a lot more food options this year, with several stands set up on the patio, Tomoko and I decided to walk over to Restaurante El Faro so we could sit down for awhile and, frankly, have a nicer lunch. 😉 Which you can see, we did indeed have. The only thing was that by the time we got back to the event, several of the producers were already packing up (!!). Since they were offering another Wine Bus back to the train station around 8 pm we assumed that the producers were going to stay around longer. Oh well. It was still a fabulous day and great to hang out with Tomoko again. 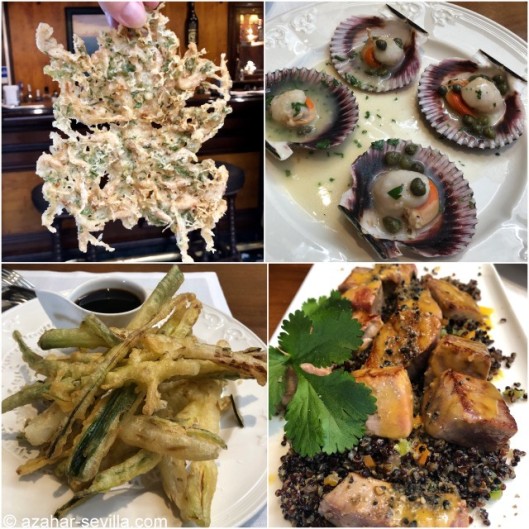 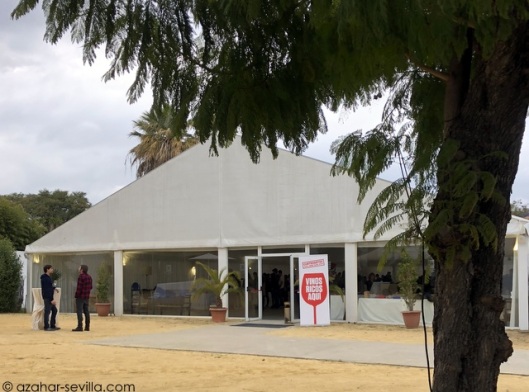 Like the sign says… vinos ricos aguí! And indeed there were. The third Cuatro Gatos Wine Fest took place last Saturday (February 24th) under the big top behind the Hotel Duques de Medinaceli in El Puerto de Santa María. Peter and I arrived by train around noon and made our way to the hotel-apt we had booked for the night. 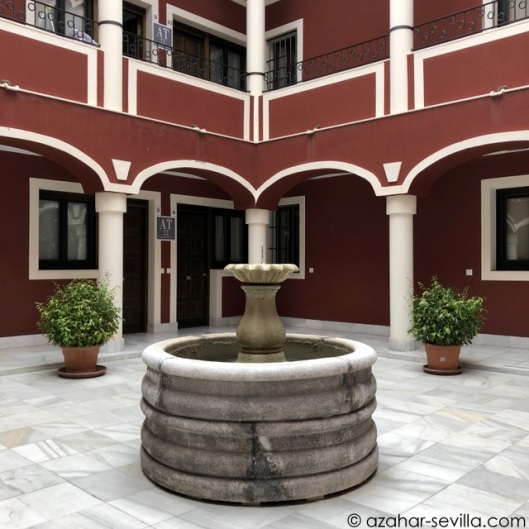 The courtyard of the Palacio de Luja is much more impressive than the rather tired and slightly sad apartments they offer, so I’m not even going to show photos of the apartment. It was clean, though with an overpowering “air freshener” smell, but everything just looked old and unloved, if you know what I mean. Luckily we were out and about most of the time. 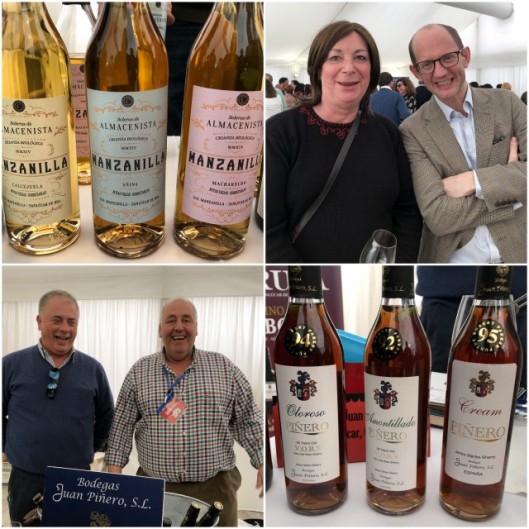 Somehow I didn’t take many photos at the wine tasting, probably because it’s not easy to hold the iphone one-handed. It was great running into Paula and Andrew – two of my favourite sherry gurus – and seeing lots of other people I know, both producers and fellow wine lovers. We mostly hung out around the sherries, and got to taste some pretty spectacular wines. It was also a learning experience for me, tasting the groundbreaking wines by Ramiro Ibáñez and Willy Pérez, and also a new release of three 2014 single pago manzanillas by Viñas Callejuela, clearly showing the importance of terroir. Looking forward to visiting the Pérez and Callejuela bodegas soon. 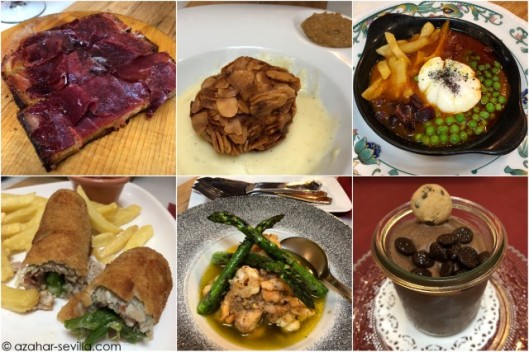 Around 3 o’clock we took a lunch break and headed over to one of my favourite spots in El Puerto – La Bodeguilla del Bar Jamón. They were offering a stand-up buffet at the event, but sitting down for awhile at this point was a very attractive idea. Paula joined us and, as you can see, we had a delicious time. After lunch Paula had to drive back home to Mijas, and we went back to try a few more wines before calling it a day. 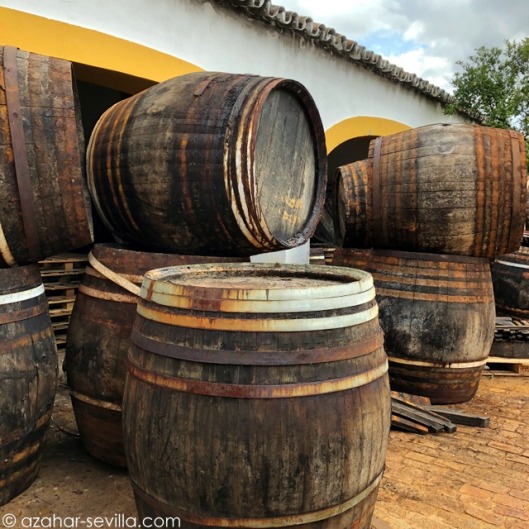 After stopping by the hotel to change shoes we headed out again for a walk around town and ran into another person we know who has recently moved to Cádiz. Jane and her son were looking for somewhere for dinner and so later that evening we once again found ourselves at Bodeguilla, this time with them, for a tapas snack at the bar. Then it was back to the hotel to sleep. 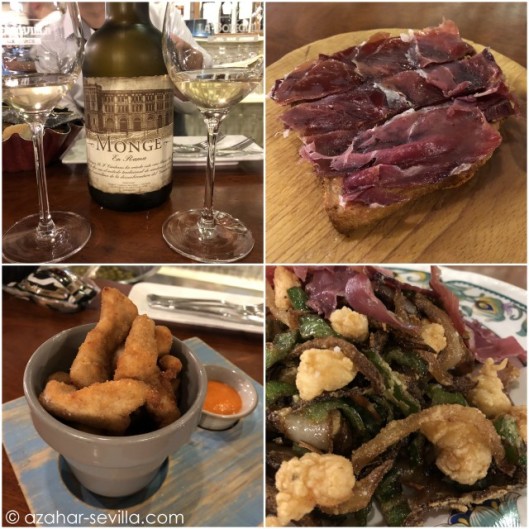 Next morning over breakfast we were trying to work out what to do for the rest of the day (our train home was for 6pm) and we decided there probably wasn’t much doing in El Puerto on a Sunday. So after a quick look at the train schedule, and also a quick google for a place to leave the suitcase, we popped over to Cádiz, which turned out to be an excellent idea. More on that tomorrow! 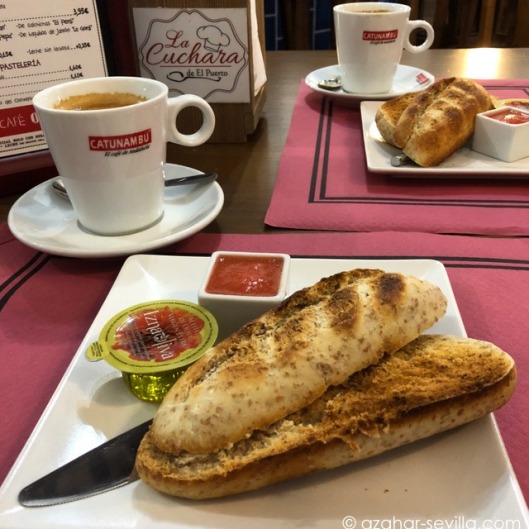 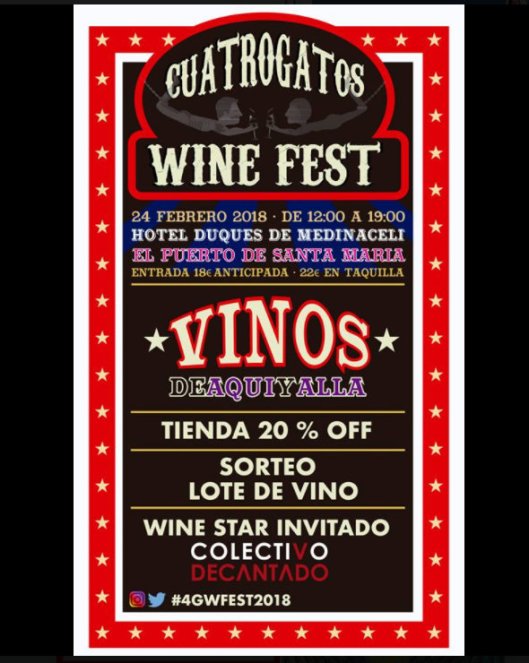 I had been going back and forth about attending this wine event in El Puerto de Santa María and then yesterday morning decided to go for it. The wineries participating sound amazing and, you know, a trip to the coast before my oncology appointment on Monday suddenly seemed like a Very Good Idea. Instead of the original plan of a day trip, I also got a good deal on a place to stay overnight, so now it is officially a GETAWAY. Anyhow, will report on the event after I get back – meanwhile watch my Instagram. Hope you are all having a great weekend too. xx