I almost never want STUFF anymore, unless it’s practical stuff like new sheets or something I want/need for the kitchen that will enhance my day-to-day life (like the new oven). But this is totally impractical – a huge white vase with little pig heads all over it. I don’t even know where I’d put it. But I want it. Kind of like when I wanted that massive dragonfly sculpture or the lily chair. Or that new sofa that I will never buy because the cats would rip it to shreds within a week. Likewise I will probably not buy this vase.

But never mind. I am keeping track of all the STUFF I haven’t bought this year because that means when I splash out on a new iPhone 8 this September then it will end up being free. Logic. 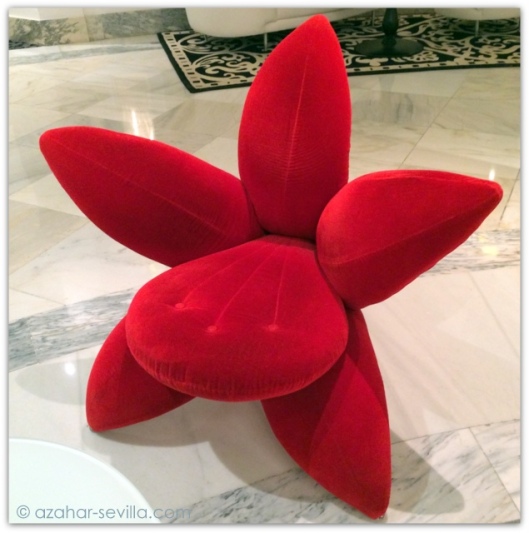 I want this lily chair. Just like I want the dragonfly. And I mean, I really really want them!

So what, you say? Well, it just surprises me that I am suddenly coveting THINGS. For those who don’t know my cancer story it may sound silly, but ever since I was diagnosed back in 2008 I haven’t really been into buying things. Well, other than gadgets – computers, iPhones, etc –  things that are useful and fun NOW (carpe diem). And more recently I’ve been into buying experiences, mostly travel related. Even after moving house three years ago I kept “decorating” to a minimum. New curtains, some kitchen stuff, a chair or two… mostly because I tend to live from PET scan to PET scan. What’s the point of spending money on STUFF when my next scan might show I’ve only got a short time left to live? With that in mind, I know I was a bit reckless not only getting one young cat (Loki) to keep my beloved Azar company after his best mate Sunny died…. but then I took on two more rescue kittens! Duh. Then again, when it comes to cats I’ve never been what you’d call sensible.

But to get back to coveting. I honestly don’t understand it. According to the docs I will finally be released from needing PET scans every six months if the next two turn out clean – next August will mark five years since I finished my last chemo. And then I will only (only!) need PET scans once a year. It’s a curious thing, living in six-month stints of time. Of course I make plans, and work towards a future. But always bearing in mind that, for example, all those plans I’ve made for beyond April this year (next scan) may never come to pass. And before you say “oh well, Shawn, none of us has any guarantee that we’ll be alive six months from now”… well, you are not me. You (probably) weren’t diagnosed with stage IV cancer and you (most likely) haven’t been told by your doctors that they can’t understand why you’re still alive. In any case, I don’t go around thinking I’m about to die, which is why I keep making plans and hoping for the best. But you know, all things considered, I’m cautious about what I hope for. And so it just seems silly to spend money on THINGS.

Except suddenly I’ve found myself not only wanting things, but quite outrageous things. Like the dragonfly sculpture. I don’t know why but as soon as I saw it I felt like it belonged to me. That I absolutely had to have it. Then today after attending a press luncheon at five-star hotel Gran Meliá Colón I passed through the lobby on my way out, and instead of walking by their fabulous bright red rose and lily chairs (as I’ve done many times in the past) I decided to try them out. And as soon as I sat down in the lily chair… it felt like mine! It’s absolutely the most comfortable chair ever. Perfectly designed for reading, watching tv, whatever. And I want it!

So what’s going on? Why am I suddenly wanting to buy not just STUFF but crazy expensive stuff that I don’t even need? Is my body trying to tell me that it is cancer-free for good now, so I should feel free to buy what I like? Or is it telling me that I may as well blow whatever money I have on crazy stuff that’ll cheer me up because I won’t be here this time next year? Or what?

Lest you all think all this new-found fame is going to my head, I just wanted you to know that after a long day of glamourous meetings and interviews, being wined and dined, and otherwise being made a huge fuss over, I still have my sox life to contend with.

Weird thing about sox. Even though I only ever do my laundry at home and there is nowhere for errant sox to go missing, they still go missing.

The other thing is that, although I only ever have two types of sox – shorty sports sox that just go up to the ankle and somewhat taller everyday sox – they are a total bugger to pair up. Because each year I get a new 6-pack of each and they are always slightly different except that THEY ARE ALL BLACK.

I sometimes think I’ll go blind trying not to pair up this year’s sox with older ones. Especially when I’ve done a whack of laundry and end up with THIS.

I can’t wait to get back to wearing sandals…

Nothing like spending most of a week stuck in bed and feeling like crap to focus on… other things. And as 2013 is still young, it’s also a good time to think about change and goals for the year to come. My main goal, of course, is to stay cancer-free, though there’s little or (I think) nothing I can do about that. Next PET scan will be in March. Will she get another 6-month reprieve? Stay tuned folks.

In other news, I may have to move! Not because I want to but because I don’t think I can afford to stay where I am. When I first took this place with Peter two years ago the understanding was that he’d be paying half the rent and bills, but unfortunately this isn’t happening. And no, I’m not going to try sharing with a total stranger (been there, too old for that now) so finding a smaller place I can afford on my own might be necessary. It would mean “downsizing” considerably, getting rid of furniture and probably my books – at least two rooms full of “stuff” – but at this point I’m ready to do whatever I have to. My food tours are really taking off but, you know, I don’t want to work my butt off and then still end up going into debt just so Peter can have a roof over his head. And the truth is that I don’t use the upstairs room or terrace much, since I spend most of the day working in the “livingroom office”. Anyhow, I’m just getting myself psyched up for this in case I have to move. There will be no rash decisions. So again, stay tuned.

On the bright side, I discovered this morning that I lost 2.5 kilos this past week! Which more than takes care of the “Christmas excess”, and kinda inspires me to keep on with the light eating thing. I’m still not quite ready to get back to the gym but, considering I lost this weight while mostly being curled up in the foetal position, I’m beginning to think there’s something to the theory that exercise, while good for maintaining general health and fitness, really isn’t such a big factor when it comes to weight loss.

So it looks like another day mostly at home, although it’s very blue and shiny out there and I’d love to get out. But I now have The Cough (which apparently happens around Day 6) and my chest feels like a fat dwarf – or Loki – is sitting on it. And without warning I start hacking away, which I do my best to stop, and have been pleased to discover that by careful breathing I’m actually able to stop it a lot of the time. But sometimes not and it feels like I’m going to turn myself inside out. A friend told me he coughed so bad during the Coughing Stage that he pulled a muscle in his armpit! Anyhow, I have two meetings tomorrow morning and am giving a friend a blog class in the evening, so I reckon another day at home is prudent.

What’s new with you guys? Have you got any plans happening?

Actually, Azar’s usual post-breakfast cuddle is something that tends to keep me IN bed awhile longer – can you blame me? But while reading twitter in bed this morning (just after taking this photo) someone asked this question and it got me thinking. A very long time ago when I was still trying to figure out what I wanted to do with my life I only knew that I wanted my work to be exactly what I’d want to do when I got out of bed in the morning. And finally it is! So that’s something of an accomplishment, and it only took about thirty years and then happened almost by accident.

So other than wanting to get to work… the smell of freshly brewed coffee, the sun shining through my white gauzy curtains, the sound of the street “waking up” and blackbirds singing – and more often than not the complaining of three hungry cats – are all things that get me up.

So how about you? What gets you out of bed in the morning? And don’t say “to pee”.