And by SHE I mean ME in my many Twitter guises. You may recall that I woke up one morning in late April to find that seven of my Twitter accounts had been suspended overnight, citing a breach in Twitter rules, specifically for “manipulation and spam”, and one of the seven was further charged with attempting to evade a permanent suspension by starting a new account. I did a little detective work and I think I found the “guilty” account, long derelict, that had probably been hacked and was – I suppose! – being used for posting weird shit. No idea since I hadn’t even looked at it in years (and then was not allowed access to it). I then supposed that the other accounts were found guilty by association. But I mean… this really fucked me over. Especially for the accounts directly linked to my work. So I started using yet another account of mine, started a few years ago so they couldn’t accuse me of trying to evade suspension, and have been posting stuff there as “Sevilla Tapas”. But even with friends helping with RTs I only ended up with about 340 followers (compared with close to 8000 on the ST account) and I kept wondering how I was going to reconnect with everyone again. I couldn’t even find all the people I’d been following.

Then today I clicked on something that brought me to the We Love Tapas twitter account and – OMG it was working again! So I signed in and then checked the other accounts and, same deal, they were all up and running. I mean, without any notice from Twitter that they had been reinstated, and without any proper reason given for having shut them down in the first place. Do I care? Fuck no! I just hope they stay reinstated. I’ve already arranged 2 Factor Authorisation on the accounts (something I have for Instagram, but hadn’t done for Twitter) and changed the passwords AGAIN and am now just really enjoying having my babies back. Twitter remains my favourite social media platform, with Instagram a runner up. But I talk more with people on Twitter, and have met some amazing people there, many of whom are my friends now.

Meanwhile, it seems I lost over a hundred followers on the Sevilla Tapas Twitter account while I was away. Weird. I wonder if they were bots that got eliminated during whatever the fuck was going on these past six weeks. But yeah, don’t really care. I’m just so happy to be reconnected with everyone there again. Go and say hello!  🙂 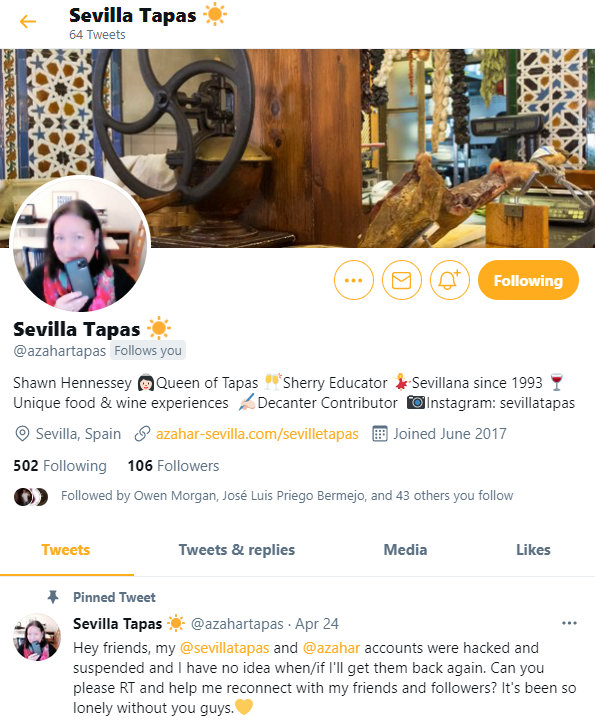 So… fuck. It’s been an uphill battle with trying to get back on Twitter after I was VERY WEIRDLY suspended from seven accounts overnight last week. Half of them I hadn’t looked at in years, and one of them I cannot gain access to at all, which I think must be the one that was hacked. So yeah, fuck.

Two of those accounts were “accused” of trying to evade permanent suspension by starting new accounts (never mind they are both almost 10 years old) but there is no Twitter rule that I know of that stops me from using other accounts I have had going before the suspension. Enter @azahartapas, which I started in 2017 when I thought I’d need a separate account for my Azahar Tapas website.

So I am not breaching any rules by using this account, but it means I have to start over from zero. That means zero followers & friends, and also me trying to find all my friends again. And well, in the past day or so I’m up to just over 100 followers. Think it will take a while for me to get back to the almost 8,000 I had before. Anyhow, please stop over at the new place and give my pinned tweet an RT and @azahartapas a follow. 💛 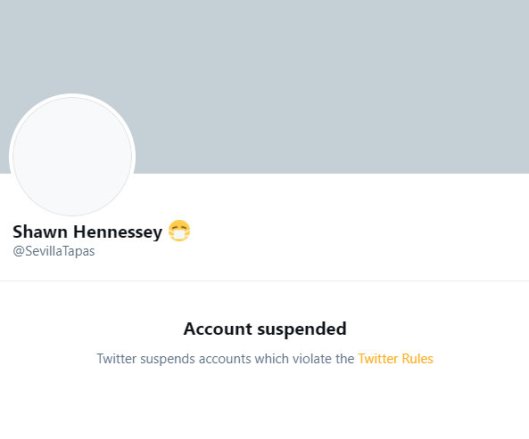 Woke up this morning to discover that overnight about half a dozen of my Twitter accounts had been suspended. And a couple of those had additionally been “accused” of attempting to evade a permanent suspension, including one account I hadn’t even looked at in years. Meanwhile another bunch of accounts are still active. Why so many accounts, you ask? No idea really. Most were started over the past 10 years or so as different business ideas popped up, mostly to secure the user name. Some were in use for a while, but the only two I actually use these days are @azahar (personal) and @sevillatapas (mostly business), same as on Instagram. In any case, there is no rule about having several accounts.

Anyhow, I have no idea what’s going on or why some accounts were suspended and others weren’t. I mean, I clearly haven’t been manipulating or spamming anywhere. And how could an account that hasn’t been used in years be starting new accounts to evade permanent suspension? The mind reels. I’ve read that suspensions can last for 24 hours up to a week, so for the moment I am going to just wait and hope this was some weird glitch that gets sorted soon. Either that or I’ve been hacked or “reported” by someone who wants to close my accounts (??). Has this ever happened to you?

END_OF_DOCUMENT_TOKEN_TO_BE_REPLACED

Why is everyone acting like having to forgo ONE family Christmas is the end of the fucking world? It’s exactly this sort of selfish thinking (what no holidays? no birthday party? no wedding?) combined with reckless entitled behaviour that keeps us stuck in this mess.

Well it would be, wouldn’t it? 😉 Anyhow, check this out. I was feeling particularly annoyed with selfish assholes who think they are entitled to do whatever they want because, well, they’re selfish assholes. So I put up this tweet and somehow it has garnered over 150 likes – more than I’ve ever had ever. Also got a whack of new followers, but they’ll probably unfollow after they realise I am mostly talking about tapas and wine.

Look, I get that we are all suffering from Covid fatigue. But I’ll tell you what’s worse than Covid fatigue. No, it’s not actually dying yourself (because then you’d only suffer until you die) but having someone, or many someones, you love die. Between US Thanksgiving and Christmas things are looking pretty scary.

Well it made ME laugh! This popped up in my Twitter feed last night soon after I got into bed and it did make me laugh out loud. I really needed that. And as we all know, the best humour is the stuff that has an element of truth to it.  😉