These post-IKEA cañas were much needed after another long (and largely fruitless) trip out to Tomares. In fact, the bus ride only takes 10 minutes, but there’s the hike to the station, and also to the store once you get there. This time I was armed with a LIST and was determined not to waste any time. Ha. It turned out that the tray-table I wanted looked quite different in person than it did online, so I ended up not getting it. And – even worse – the frying pan I bought for my new inducción cooker will have to be returned (long story, and even a longer trip just to return something).

My original plan had been to bus there and taxi back, using Cabify (thanks to Cinta for telling me about this service). But after not getting the table it didn’t seem worth getting a taxi, so we opted for the bus back, which of course we missed by 30 seconds and ended up having to wait half an hour for the next one. Which is where these beers came in, after arriving back in Sevilla. On the way home I said – as I always do – that I never wanted to go to IKEA again. But somehow we forget between trips how exhausting it is, plus there’s that damn frying pan I have to take back… 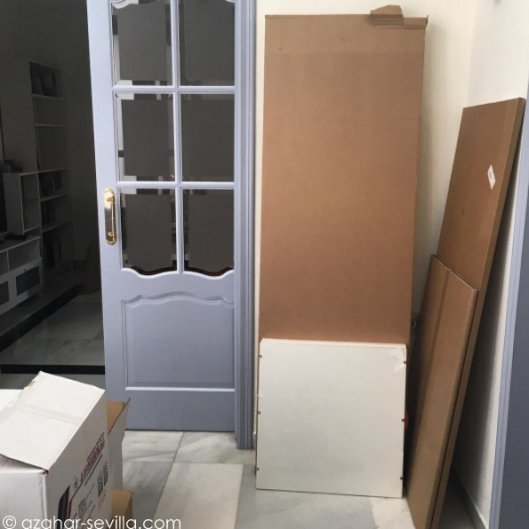 So FUCKING fed up with @IKEAspain, who have been dicking me around for a week over this one order. A cupboard for my hallway, which was finally delivered 3 days late, but they still haven’t sent anyone to assemble it. Three times now I’ve waited at home (4 hour windows) and nobody showed up, or even called to say nobody would be showing up. This is the shittiest customer “service” l have ever experienced.

No problem when l spent 1200€ at IKEA two weeks previously, but apparently this 250€ order (and my time) doesn’t matter to them. How about l invoice them for my 12 lost hours? Not to mention l wouldn’t still have fucking boxes in my hallway if this had all been done as promised. And I’m supposed to be on holiday this week, not dealing with this shit. At this point it’s feeling like abuse.

This was not a good day. And not JUST because I had to go back to IKEA 😉 , but because things got off to a weird start and then got positively exhausting.

Woke up with tons of things to do in the new Casa Azahar, and also had errands to run before a lunchtime biz meeting. Errands such as going back to Emasesa (the water company) to change the contract to my name… FOR THE THIRD TIME. I had kept forgetting this or that document, but finally I was all prepared and got the deed done. While I was there I was told that there was a last-minute opening to “empadronar” (register for the census) which is necessary to prove how many people live at my home, and which is also important because the more people living at a dwelling means you get a cheaper water rate. BUT, I had the biz meeting planned so had to forfeit the appointment – next opportunity won’t be until September, and so until then I’ll be paying a higher water rate.

Got to the meeting point early and – not having had breakfast – ordered a tapita to keep myself going. But when the person I was meeting arrived, I was told our meeting was cancelled. So I not only didn’t get the meeting, I lost a chance to “empadronar” (and save money on my water bill!), and also ended up on a bus to IKEA at the worst possible time of day (for taking a bus – HOT).

Finally got to IKEA and somehow it took ages, even longer than my previous visit, when I bought half the store. I think I was just so disheartened about how the day had been going that everything felt like like a massive chore. There was no joy in any of it. In fact, I ended up forgetting a couple of the things I’d gone there to buy, but at least I got the most important thing – a nice storage unit to act as a pantry for the extra stuff that won’t fit in the kitchen cupboards.

Then home again… blazing heat… long wait at the bus stop… was EXHAUSTED when we finally got back to Sevilla. And so on the way home we stopped in for a snack at a place near the new house that I hadn’t been to in years, and that cheered me up. The guys were so friendly, the food was nice, we had some wine…

Anyhow, I also took this photo while at IKEA, which I found amusing. A dressing room display replete with feria flamenco dresses. So very Sevillano that it made me smile. They say that moving house is right up there STRESSWISE with having a death in the family. God knows it’s been a crazy few weeks, and at times I’ve felt stressed beyond what I thought I could handle. So it’s important to find those little things that make you smile. 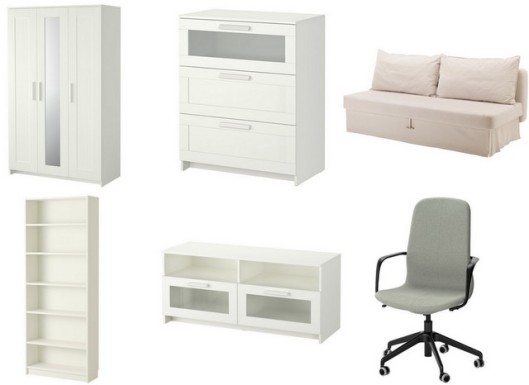 For someone who is supposedly DOWNSIZING I sure bought a whole whack of stuff at IKEA today. Though as you can see, most are storage-type items, which will help at the newer, smaller Casa Azahar. And I did really need a new sofa, and so found a very simple one that I could make as “cat-proof” as possible, without arms (aka scratching posts) and easy to cover (PROTECT) with a nice cotton throw. It’s a sofa-bed too, so I can still have friends stay over. The only splash out was the new ergonomic wheelie office chair. Man is that thing comfy!

Another thing I discovered today at IKEA… if you are sending all your stuff by IKEA Transport you can go to an info-desk on your way out, show them everything you want to buy, and they will put it all on one bill for you. Including all the little (kitchen/bathroom etc) stuff you bought, and want sent with the big order items, which gets left at the info-desk for pick-up. AND THEN… you go to the cashier, pay for your stuff, and walk away.

I couldn’t believe it. No schlepping through the self-service aisles looking for your flatpacks, then painfully loading them onto the trolley, eventually arriving exhausted at the check out, and then having to go over to the Transport Department and organize the delivery. None of it! I was so happy. Well, until I was at the check out and saw that they actually charge 16€ for this “pick up” service (wtf?). At that point I couldn’t say no, but I also didn’t actually want to. For 16€ I saved myself from at least another hour of IKEA HELL and was outta there in record time.

But I mean, why even charge for this? If I’d ordered everything online I wouldn’t have been charged a “pick up” fee. At least, I don’t think so…

Anyhow, it was all fine. And for what I need now, IKEA works. Practical, affordable, and often quite cute designs (LOVE my new wheelie chair). AND… it will all arrive at the new Casa Azahar tomorrow morning. 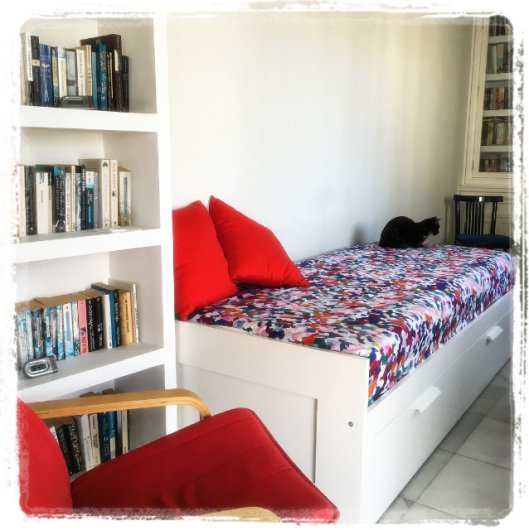 So the IKEA Tale of Woe wasn’t all bad, because I did end up getting this sofa-bed thingy for upstairs, which I’ve been wanting to do since January. And it looks much nicer than before, especially since Peter is now sleeping upstairs (his former room downstairs is now a much needed utility room). So by day it doesn’t look so much like a bedroom upstairs, and he can also use it as an office (there’s a table out of shot, under a window to the right). Morcilla likes it too!