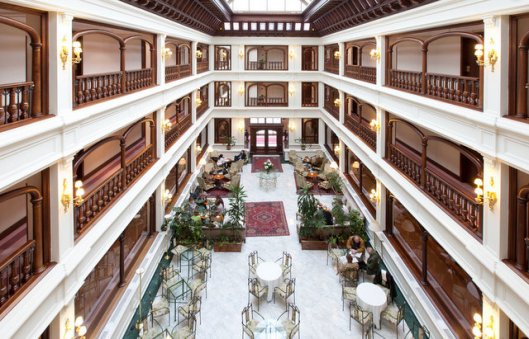 After an intense week of activities in Galicia it was nice to be able to get up at my leisure on Sunday morning. We had arrived in Madrid two hours later than scheduled on Saturday night, so didn’t actually get to the hotel until almost 11.00 pm. Luckily Andrew had recommended a nearby tapas bar, El Del Medio. I got in just before the kitchen closed and had time for a couple of tapas (hadn’t eaten since lunchtime!). 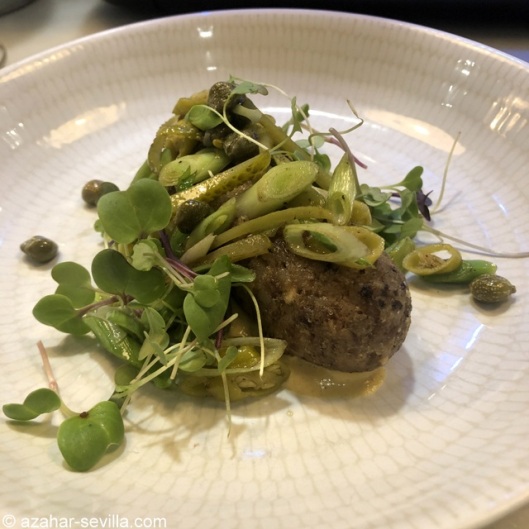 On Sunday my train home was at 6.00 pm, so I made plans to have lunch at another place recommended by Andrew, Amano, which had just opened in August. When I went downstairs to have a bit of brekkie I ran into Rachel, who was leaving for Scotland that afternoon. After a couple hours chatting over coffee we checked out and then continued chatting for another couple of hours, this time over wine. It was great because although we’d been together for five solid days we hadn’t really had time to talk much. Anyhoo, by 2 pm we were both feeling a bit blurry so it was time to get our taxis, hers to the airport and mine to the train station.

Bag checked at Atocha, I made my way over to Amano for lunch. I was excited to try this place because Andrew had told me that it was run by Fran (former co-owner of Alabaster) and a chef that he’d partnered up with, so I was expecting good things. But I was still surprised by the amazing service. There was only bar space available when I got there, but I told them I lived in Sevilla and was used to sitting at the bar (Madrid is really more of a restaurant city). Then I asked for a glass of white wine and THIS happened…

END_OF_DOCUMENT_TOKEN_TO_BE_REPLACED

Last week Patrícia (owner of Singular Trips in Lisbon) got in touch with me, saying that she and her husband Luís would be in Sevilla in a few days and that she would like to meet up. She has been getting requests for tours in Spain and wanted to know more about what I do, etc… and so we met for an afternoon tapeo. Lovely people who really care about what they do, so hopefully we will end up working together sometime.  🙂 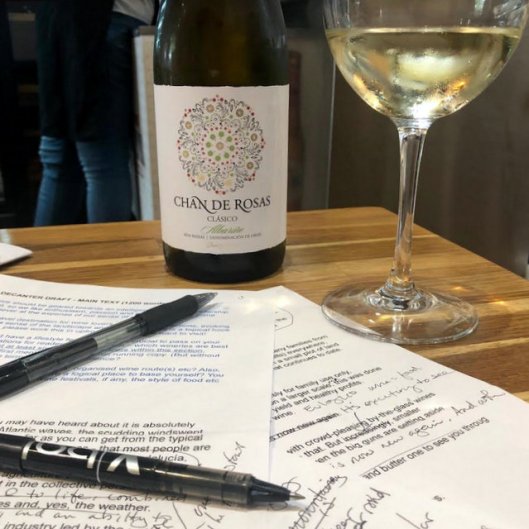 If any of you don’t already know that I’ve been GOING THROUGH IMPOSTER’S SYNDROME HELL writing this commissioned article about Galicia – which was the reason I went to Galicia two weeks ago – then, you know, where have you been?? 😉

Okay, I have actually written a lot. Way over the word limit I was given. The thing is that it all sounds like total crap to me and doesn’t seem very cohesive.  BECAUSE I AM NOT A WRITER, OMG, STOP ASKING ME TO WRITE THINGS. STOP IT NOW.

But then I remembered that my friend Ania said it sometimes helps to get out of the house, find a café or somewhere else to write for awhile… and in desperation I took this advice today. And hey… it worked!

Well okay… “worked”. Still not sure about that but it certainly helped. And I think part of it was – duh – using pen and paper, rather than just writing on the computer. I dunno, there’s something organic about physically writing that seemed to help me put my thoughts together a bit better. And well, the article is still not done, but at least I now feel like I’m a bit more organised. Thanks Ania!

Well okay, I cannot actually claim to have writer’s block because that would be making the clearly erroneous assumption that I’M A WRITER… but it’s been tough going this past week, working on the Galicia article. If you need me I’ll be drinking albariño at my desk, hoping for de-vine inspiration (also not a comedian). 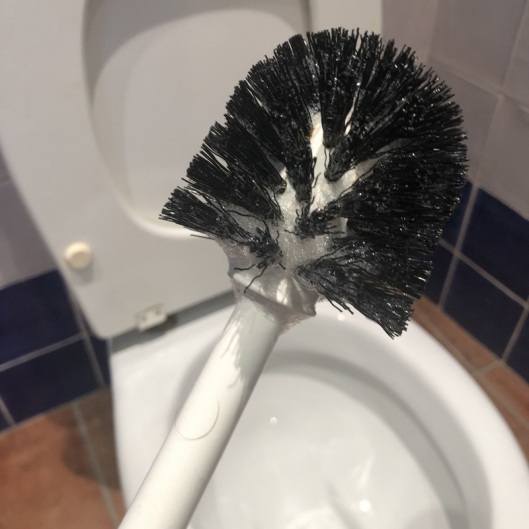 Soooooo… have been working on a blog post about tourism in Sevilla. Well, it applies pretty much everywhere I’m sure. Just putting some thoughts together about the effect of mass tourism on travel destinations, and also about how places are so often marketed in a misleading way. One of those horrid catchphrases that I’m sure you’ve all heard by now is LIVE LIKE A LOCAL.

To wit I’ve been capturing some photos of how I – a local – actually live in Sevilla. This was one of them. Funny, right? Well, apparently not. I got some serious verbal backlash when I posted this on Instagram a few days ago with #livinglikealocal and #livelikealocal hashtags. This was followed by a dozen or so “unfollows”. And I had been SO CLOSE to reaching 5000 followers  😉

I would have quoted the Divine Ms M – FUCK ‘EM IF THEY CAN’T TAKE A JOKE – but I’m sure that would have just got me into more trouble. Anyhoodle… will let you know when I finish.  🙂